From Tiandi Encyclopedia
(Redirected from Saticoy)
Jump to navigation Jump to search
This article is about the country. For other uses, see Ahwaimuwu (disambiguation).

Early Ahwaimuwese society depended primarily on hunting-gathering with some limited input from farming. During the 1st millennium BCE, a series of droughts and the depletion of natural resources devastated Ahwaimuwese society, but also brought a new innovation in the tomol, advanced boats capable of navigating the oceans which allowed for deep-sea fishing. This invention completely changed Ahwaimuwese society, allowing for development of a market economy and stratified society in which significant amounts of power was held by members of a guild known as the Brotherhood of the Tomol.

Ahwaimuwu was made a protectorate of Jeongmi in 1587 before being annexed in 1620. The colonial period saw a large influx of Jeongmian colonists, eventually known as Bisaeng, who came to dominate the country with large plantations, control over fishing grounds, and mines. In 1960, Ahwaimuwu was granted independence, leading to significant amounts of Bisaeng fleeing the country.

Today, Ahwaimuwu is a member of the Congress of Nations and the Central Yeongju League.

The name Ahwaimuwu comes from the village named ʼAwha'ymuwu (Ahwaimuwese language: "moon beach"). ʼAwha'ymuwu was the hometown of King Sisquoc, founder of the Kingdom of Ahwaimuwu.

Speaking a series of related dialects, the Ahwaimuwese lived along the coast, its immediate interior, and on a series of offshore islands. From their position along the coast they were able to draw upon the rich resources of both the land and the sea in the area, supporting a relatively densely settled population of hunting-gathering peoples. They lived in round, permanent, substantial houses, covered by grass of reeds, some of them fifteen meters in diameter and able to hold up to seven people. Each village possessed its own sweathouse, built partially underground and entered through an opening on the roof. Soapstone bowls, wooden plates, ornately decorated reed baskets, and a variety of items made from bone or shell reflected a pattern of technological innovation far beyond that of other hunting-gathering peoples. By the 11th century BCE, maize had begun to be farmed in northern Ahwaimuwu. Farming remained light and farmed foods were simply added to their still mostly hunting-gathering diet.

The first millennium BCE witnessed the growing Ahwaimuwese population overhunting and depleting herds of deer present in the interior, multiple crop failures, as well as increased levels of warfare and violence among rival groups, for which evidence is presented through the unusually large number of skeletons with bashed-in skulls and arrow or spear wounds.

The classical era in Ahwaimuwu is generally said to have begun with the invention of the tomol, a type of planked, oceangoing canoe some seven to ten meters long and with a cargo capacity of over two tons, around 600 BCE. The invention of the tomol was a turning point in Ahwaimuwese history, allowing for deep sea fishing by the Ahwaimuwese and heavily stratifying Ahwaimuwese society. Building or owning one of these vessels brought immense prestige, wealth, and power, injecting a new element of inequality into Ahwaimuwese society. Boatbuilders would organize themselves into elite craft guilds, one of them being the later Brotherhood of the Tomol, monopolizing canoe production and holding the tools, knowledge, and sacred medicine associated with these boats. The tomol stimulated a blossoming of trade along the coast and between the coast and the islands as plant food, animal products, tools, and beads now moved regularly among Ahwaimuwese societies, which became increasingly dependent upon each other.

The advent of the tomol also helped transform Ahwaimuwu into a prosperous market economy, with individuals acting in a profit motive; stringed beads being used as a form of currency and their supply regulated in order to prevent inflation; specialized production of price-attached goods such as canoes, beads, tools, and basket; and payment for services such as burial, healing, and canoe renting. As wealth began to accumulate within the hands of a few, class distinctions began to strengthen themselves as time went on. Bearskin capes were reserved for canoe owners and local leaders, all of whom owned tomols, and they were frequently buried in them. Even then, however, village chiefs and minor kings would collect donations and taxes from the wealthy in order to feed the peer and to stock food in case of famines.

in 913 CE, a minor king and member of the Brotherhood of the Tomol by the name of Sisquoc began to heavily expand his territory.

In 1587, Ahwaimuwu was made a protectorate of Jeongmi. In 1620, Ahwaimuwu was formally incorporated into Jeongmi's empire. In 1773, a revolt broke out against Jeongmian rule, leading to a ban on the Brotherhood of the Tomol and tomol production. While the Brotherhood of the Tomol was effectively disbanded, tomol production continued, although with ever-decreasing quality, until knowledge of the craft was virtually all lost during the late 18th century.

During the colonial period, Ahwaimuwu shipped seafood, rice, fruit, nuts, and gold to Jeongmi. The two main sources of revenue for the colonial government were gold and abalone. In the early 20th century, oil was discovered off of the country's coast, and the colony became a major source of oil.

Due to Ahwaimuwu's moderate climate and productive farmland, many Jeongmians migrated to the colony; these colonists, known as Bisaeng, ran major plantations in the country and their descendants today remain a significant force in Ahwaimuwese politics, business, and media.

In 1955, the Jeongmian government chose to hand control over to the natives, and elections were called to set up a government prior to independence. Immediately following this declaration, there was a mass exodus of Bisaeng from the colony, which continued several years after independence. On May 3rd, 1960, Ahwaimuwu was granted independence from Jeongmi.

Much of Ahwaimuwu has a Mediterranean climate with cool, rainy winters and dry summers. The cool Ahwaimuwu current often creates fog along the coast, especially during the summer. Wildfires are less common along the coast because of the cool humid summers, but can occur in autumn when the Marine layer is less common making it warm and dry. The country's mountain ranges influence the climate as well, with some of the rainiest parts of the country being west-facing mountain slopes.

The Republic of Ahwaimuwu is a unitary presidential republic. The Ahwaimuwese parliament is a bicameral legislature.

Ahwaimuwu is a member of the Congress of Nations.

Ahwaimuwu is considered a newly industrialized country. Much of the country's industry is controlled by the country's Jeongmian minority.

28% of the population is employed in agriculture, a number that has faced a sharp decline since the 1960s. Agriculture has been experiencing a transition from labour intensive and transitional methods into a more industrialised and competitive sector. The relative contribution of agriculture to GDP has declined while exports of goods and services have increased. Major crops grown in Ahwaimuwu include maize, grapes, cotton, and nuts. Ahwaimuwu is one of the world's major producers of wine, producing over 800,000 tonnes each year.

Tourism is a major economic factor in Ahwaimuwu, accounting for 5.2% of its GDP in 2017. Shisholop is by the far most visited city in the country. Most tourists tend to come from Jeongmi and neighboring states.

In 2008, Ahwaimuwu ranked sixth in the world in tonnage of fish caught with 3.6 million tons caught. Fishing has historically been a major part of the Ahwaimuwese economy and provided for much of the traditional diet. Ahwaimuwu is one of the world's largest fish exporters.

Ahwaimuwu's population is predominantly Ahwaimuwese, with a significant Jeongmian minority number over a million, the majority of these descendants of colonists who arrived prior to independence. There is also a notable Yahuimilcan population, who arrived to work in the country's mines and plantations when both Ahwaimuwu and Yahuimilco were under Jeongmian rule.

Belief systems in Ahwaimuwu have been heavily shaped by its centuries-long rule from Jeongmi and the presence of the Saengbi. 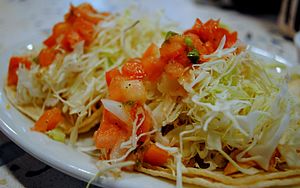 Fish tlaxcalli are a popular dish in Ahwaimuwu, reflecting the country's diverse influences.

Main article: Sport in Ahwaimuwu
Retrieved from "https://tiandi.miraheze.org/w/index.php?title=Ahwaimuwu&oldid=12480"
Categories:
Cookies help us deliver our services. By using our services, you agree to our use of cookies.