From Tiandi Encyclopedia
(Redirected from Qichwa)
Jump to navigation Jump to search
This article is about the country. For other uses, see Qichwallanqa (disambiguation).

Qichwa (Quechua: Qhichwa) is a country in the Yuraq Walla. It is bordered to the west by Guaranda.

Qichwa was home to a number of ancient cultures such as the Karal civilization, one of the oldest in the world. During the 13th century, the Kingdom of Pukaq'asa expanded from its home in the highlands and created an empire which would incorporate much of the region. During the 16th century, Qichwa saw heavy social disruption and unrest as new diseases wiped out as much as two thirds of the population. Regardless of heavy setbacks, however, the country gradually recovered, and its population returned to pre-contact levels by the mid-18th century.

The native word */qiĉ.wa/ originally referred to the "temperate valley" altitude ecological zone in the Yuraq Walla (suitable for maize cultivation). The name gradually came into usage to describe the country from the 18th century on, and was officially adopted as the country's name in 1941. Today the various local pronunciations of Qichwa include [ˈqʰeʃwa ˈsimi], [ˈχetʃwa ˈʃimi], [ˈkitʃwa ˈʃimi], [ˈʔitʃwa ˈʃimi]. 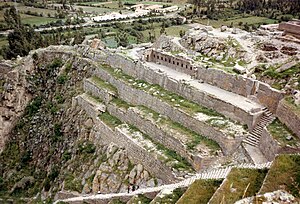 Medieval Qichwa constructed a series of intricate roads which extended tens of thousands of kilometers.

The beginning of the early modern era saw a decimation of Qichwa's population, with the country's population dropping by nearly two thirds between 1518 and 1603.

Qichwan independence was gradually eroded from mid-1700s by the Meisaani, and the country was made into a protectorate in 1833 under the Treaty of Waynaq'asa. In 1838, Sayri Cusa attempted to drive out the Meisaani, which resulted in quick defeat for the Qichwans. While the Sapa Inka was able to retain nominal control of the throne, the country was administered by and succession to the throne was overseen by Meisaani officials. During the late 19th century, Qichwa became a major exporter of caucho, made from Castilla elastica.

A Congress of Nations brokered peace in 1948 divided Qichwa into East Qichwa, run by Coniraya and the Independence Front, and West Qichwa, which was run by the Sapa Inka, with both states claiming to be the sole authority over all of Qichwa. The division was not meant to be permanent, with plans for Qichwa to be united following elections the next year. Nonetheless, several hundred thousands of East Qichwans fled west in fear of persecution by communists. Shortly before elections were to take place, the Sapa Inka claimed that Qichwans were not yet ready for democracy and cancelled election plans for West Qichwa with the backing of Jeongmi.

The West Qichwan government was unstable due to a lack of support from the populace; the Sapa Inka was seen as too Centralized and a puppet of Sinju, while Coniraya and others in the Independence Front were seen as heroes of Qichwan sovereignty. The Reunification Party was set up in West Qichwa and began a guerilla campaign supported by East Qichwa to overthrow the West Qichwan regime and the Sapa Inka.

In 1978, reformists took control of Qichwa and embarked on a series of free-market reforms. Collective farms were dismantled and the government encouraged private management and control of farms and factories while simultaneously retaining control of major industries. Qichwa achieved high growth rates through export-led economic growth.

Agriculture was the cornerstone of the Qichwan economy until the early 20th century. Qichwa's economy traditionally rested upon the material foundations of what is called the vertical archipelago. Many valleys can still be seen covered by an extensive set of {{wp|terrace (agriculture|agricultural terraces, which permit farming on otherwise unusable terrain and allowed for taking advantage of the different ecological zones created by variations in altitude. Historically, the state would offer great amounts of help to farmers through ways such as the construction of aqueducts and roads, provisioning of guano fertilizer, redistribution of food during times of hardship, and celebratory feasts on holidays.

As of 2011, well over sixty percent of the population expressed no religious preference. The largest religion is Intiism, with over a third of the population claiming to be Intiist. Despite this, the constitution grants both freedom of and from religion. The most prominent minor religions are Christianity and Buddhism, and there are small communities of Muslims and Jains throughout the country.

Early depictions of figures which have similarities with the creator god Viracocha have been found in ancient sites dating as far back as the Karal civilization.

Over 90% of the population speaks Runa Simi as their first language. Under Inka Roq'a, the Pukaq'asa dialect became standard Runa Simi, and the flow of foreign loanwords has increased significantly. 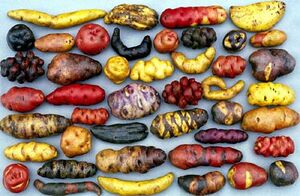 Qichwa is home to some 5,000 distinct varieties of potatoes.

The potato is by far the most prominent feature of Qichwan cuisine, being served with nearly every dish. The tuber has long served as the principle energy source for the nation's people. As the origin of the potato as well as mutations occurring from planting the seeds rather than the tubers, Qichwa features thousands of separate varieties of potatoes, many often found only locally. Potatoes are eaten a number of ways, including being freeze-dried, mashed, baked, and fried. Fishing has also provided sustenance for those along the coast as long as people as have resided there. Following its introduction, maize also came to be a major crop. Qichwan cuisine changed significantly with the introduction of foods such as beef, onions, and rice in the 16th century, all of which had previously been unknown in Qichwa.

Dishes heavily differ from region to region as well as depending upon altitude.

Retrieved from "https://tiandi.miraheze.org/w/index.php?title=Qichwallanqa&oldid=12310"
Categories:
Hidden category:
Cookies help us deliver our services. By using our services, you agree to our use of cookies.