Shojin (Shojinese: 仁繩, Shōjin) , formally the Republic of Shojin (Shojinese: 國和共仁繩, Shōjin Chōwakuku), is a primarily island nation in Western Bangju and a member of the Sinju Union. On land, it borders Igu and Jupon. The country is composed of 618 islands and a portion of the Bangju mainland. The largest of these islands, X, comprises over a third of the country's landmass and about two-thirds of its population. Shojin is the wealthiest nation on a GDP per capita basis in Bangju.

Shojin has been inhabited by modern humans for over 30,000 years, with evidence of human habitation first showing up in 32,000 BCE. Fusenic peoples arrived in the area sometimes during the early first millennium CE during a period of general eastward migration from mainland Jungju into modern-day Fusen and Bangju. The territory that today covers Shojin came under the control of Cheonje during the 6th century CE.

The country experienced a golden age of shipping and trade for several hundred years after the formation of the Kingdom of Shojin in 1013 CE, and Shojinese trading ships and communities were prominent all the way from South Jungju to Yahuimilco Bay. This gradually ended as powers such as Jeongmi, Fusen, and Meisaan grew increasingly powerful and prominent in maritime affairs and trade. Nonetheless, Shojin was able to carve out its own colonial empire.

Today, Shojin is a high-income, highly developed parliamentary republic dominated by the service sector. The country has universal health care system and is renowned worldwide for having the highest life expectancy in the world, at 87.3 years.

The name Shojin first appears in Cheonjean records during the 6th century CE, although with the characters X. The characters currently in use were decided upon by King X in 1056.

X, an X warlord, invaded and wrested control of Shojin from the declining Cheonjean Empire.

The 11th to 16th centuries were a golden age for Shojin, and Shojinese merchants played a significant role in trade in the East Sinju Sea and Eastern Ocean. The wealth obtained from trade helped fund the kingdom's expansion into mainland Bangju. 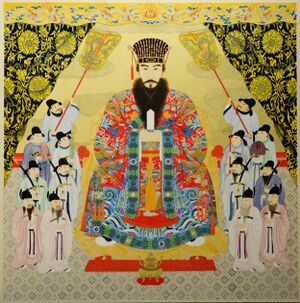 The climate of Shojin is primarily subtropical, although the southernmost islands of X and X have a tropical climate.

The island of Jinhya is a popular destination for young people and has well-known association with nightlife and the summer club scene, which attracts large numbers of tourists.

Shojin is famed for having the highest life expectancy in the world, with a life expectancy of 90.1 for women and 84.3 for men. As of 2015 there were 37.9 centenarians for every 100,000 inhabitants, which is the highest ratio worldwide. This has been variously attributed to the country's diet, advanced healthcare system, community, and low-stress lifestyle. The country has a single-payer universal health care system. 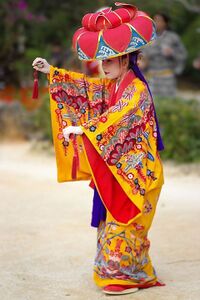 A Shojinese woman in traditional dress made from bingata.

Due to the country's location at the crossroads of Jungju and Yeongju, as well as its historic heavy involvement in trade, Shojin has historically taken in a host of foreign influences.

An'i Castle was the historic home of the Shojinese royal family. 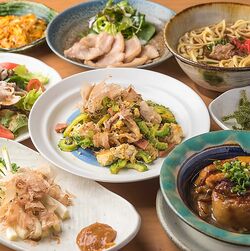 Shojinese cuisine is a reflection of both its Fusenic origins and the widespread trade it conducted for centuries with multiple different parts of the world. In addition to its native heritage, Shojinese cuisine contains influence from Fusenese, Cheonjic cuisine, and the various cuisines of Bangju and South Jungjuan cuisine. Common ingredients include sweet potatoes, rice, pork, bitter melon, kombu, and beans.

Despite being located close to the sea, the Shojinese traditionally did not consume large amounts of seafood, due to the relatively few fish species in the area as well as the high temperatures of the country. However, this has begun to change heavily in recent decades. Meat in ancient times was also a luxury afforded only to the wealthy, but its consumption rose rapidly from the 11th century onward, with a gradual decline from the 16th century until the modern era.

In the modern day, Shojin is most well-known for its high consumption of bitter melon, likely brought back to the country by Shojinese traders in South Jungju. 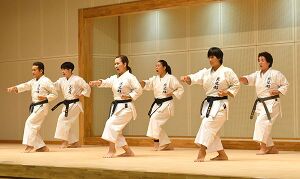 Seti is the national sport of Shojin.

The national sport of Shojin is seti, a martial art indigenous to the country. Other popular sports include chukguk.

Retrieved from "https://tiandi.miraheze.org/w/index.php?title=Shojin&oldid=12516"
Categories:
Cookies help us deliver our services. By using our services, you agree to our use of cookies.